The Pansarbandvagn 302 (Pbv 302) was Sweden's main tracked APC during the second half of the Cold War and which served as the basis for other vehicles. The Pbv 302 featured an all-welded steel double-skinned hull which gave it greater buoyancy as well as protection against ATGMs. It is a compact design with a front hull that is notable for its slight slope towards the sides and with a small rounded turret at the front left which houses a locally-built version of the Hispano-Suiza HS 804 20-mm cannon, giving it a powerful punch for an APC. Up to nine infantrymen could be carried in the rear troop compartment, with the commander acting as the tenth squad member. Hydraulically-operated hatches on each side also allowed the troops to fire from within the vehicle, giving the Pbv 302 fighting capabilities similar to an IFV. Amphibious capability was essential in order to navigate througout Sweden's extensive rivers and lakes; the M70 track was designed to provide greater traction on soft soil and greater water speed than the US tracks that were originally fitted. The Pbv 302 can also be modified as a cargo vehicle, carrying up to 2 tons of payload, as well as an armored ambulance with between 4-6 stretchers, as well as a recovery vehicle with the inclusion of a hydraulic winch. The Pbv 302 served in the Swedish Army into the early 21st century despite the introduction of the Strf 90 IFV; it was used for peacekeeping missions in Kosovo.

The prototype of what would become the Pbv 302A was first seen in 1962. Variants of the basis APC version include the Pbv 302B with improved armor and the Pbv 302C with reinforced suspension and other equipment upgrades. Other non-APC variants include the Stripbv 3021 armored command vehicle, the Epbv 3022 Armored observation post vehicle, Bplpbv 3023 armored fire direction post vehicle, Rlpbv 3024 radio communications vehicle, Pjrekpbv artillery reconnaissance vehicle and Sjuktppbv 3026 medical evacuation vehicle. The Pbv 302's chassis would also be used as the basis for the Bgbv 82 armored recovery vehicle and Brobv 941 bridgelayer, while some components would be used in the Ikv 91 light tank which is described in a separate entry. 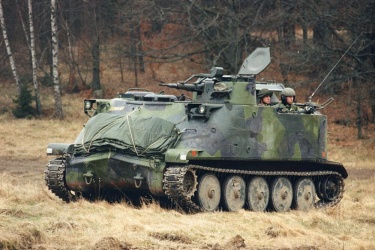