The Stridsfordon 90 (Strf 90), better known by its commercial designation CV 90 (Combat Vehicle 90), is a highly successful Swedish-designed IFV that has been continuously upgraded since its introduction in the 1990s and has met with considerable export success. The CV 90 features a conventional tracked IFV design of all-welded construction with a prominently sloped glacis plate and a large, slightly offset turret that mounts a 40-mm Bofors autocannon in its basic configuration, this gun is capable of firing low caliber APFSDS-T rounds. It features a reduced radar and infrared signature, as well as low noise, while also boasting a low profile to enhance survivability; it is also claimed to protect against 23-mm rounds on the frontal arc. The Scania diesel engine is located behind the glacis plate and is coupled to an automatic transmission, it is optimized for quick removal which can be done in as little as 15 minutes. Like most Swedish vehicles, the Strf 90 features wide tracks for ease of operation in snow and is also fully amphibious and NBC capable. Secondary armament includes a coaxial 7.92-mm machine gun, grenade launchers, and moretar tubes. The rear compartment can hold as many as eight infantrymen in fold up seats which allow the vehicle to transport cargo. Aside from the basic IFV, the Strf 90 has been adapted to a myriad of other roles including air defense, command, observation, and recovery vehicles. It can also carry other main guns such as the US Bushmaster. Export clients include most other Scandinavian countries, as well as Estonia, Netherlands, and Switzerland where it was picked over rival IFVs like the Bradley and Warrior. Many of these countries (including Sweden) have used it in combat in Afghanistan as well as in peacekeeping operations.

The original Strf 90 was designed in the 1980s and entered service as the Strf 9040 in 1993. The Strf 9040A added a gyro-stablized gun as well as other structural enhancements while the Strf 9040B had improved fire control and improved suspension. The latest Swedish version is the Strf 9040 designed for training and peacekeeping operations with additional armor and tropical equipment (at the cost of a slightly reduced troop load of 6-7). A radar-equipped air defense variant is known as the LvKv 9040. Other support variants include the Stripbv 90 command vehicle, Epbv 90 forward observation vehicle, and Bgbv armored recovery vehicle. Export versions begin with the CV 9030 with a 30-mm Bushmaster autocannon, while the slightly similar CV 9035 has a 35/50 Bushmaster III. Other export versions (some which have yet to receive orders) include the CV 90105 and CV 90120-T light tanks, Armadillo APC, as well as a combat engineering and mortar carrier variants. 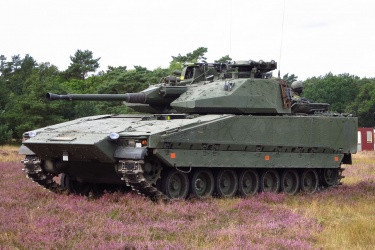