The Panzer 38(t) (known locally as the LT vz. 38) was the second of the two Czech tank designs that were eventually adopted by the German Army after the invason and annexation of Czechoslovakia in 1939. The LT-38 was armed with a longer-barreled 37-mm gun, the ÚV vz. 38, which in German service was known as the KwK 38(t). Armor was initially light, but was upgraded in later marks by riveting 25mm armor plates on the frontal surfaces. A loader was also added in German units to reduce the workload for the commander, but this came at the cost of fewer ammunition rounds. Suspension was of a semi-eliptical leaf spring type with four large roadwheels and a large drive spocket but with no return rollers. In contrast to the LT vz. 35, the LT vz. 38 was renowned for its mechanical reliability and because of this, it was later adapted for various uses with the Wehrmacht, serving as the chassis for the Marder III and Hetzer tank destroyers among other ad hoc conversions (which are described separately). It was employed from the start of the war and had an important role in the early blitzkrieg campaigns being superior to the the Panzer I and IIs that formed the bulk of the Wehrmacht's panzer forces during 1939-40; its gun even had slightly superior penetration power than that of early Panzer III models. It's success enabled it to remain in production until 1942 by which time it was mostly employed for reconnaissance and other support duties. Aside from German and Czech service, the PzKpfw 38(t) was used by numerous other Axis allies as well as Iran, Peru, Switzerland and Sweden, the latter which license-built it.

Origins of the tanks lay in the LT vz. 34 (also designated LTLH or TNHB) developed in the early 1930s for export. It was then selected after trials in 1937 for Czech Army service where it was known as the LT vz. 38. After the annexation of Czechoslovakia, the German Army took over existing stocks but it remained in production where it was known as the Panzer 38(t) (SdKfz 140). The initial German version, the Ausf A, added a loader to the turret, and this was followed by the Ausf B and C with a curved plate for the driver, smoke dispensers and new lighting system. The Ausf D added anti-splash protection for the turret ring. The Ausf E and F increased frontal armor protection by adding extra plates. The last variant, the Ausf G, had more extensive use of welding. Swedish license-built units were known as the Strv m/41 and a small number of them were exported to Slovakia. These were then known as the Ausf S by Axis forces. Other export versions included the LTP to Peru, LTH to Switzerland, and LTL to Lithuania. Other German Army conversions included the Grille (SdKfz 138/1) 15cm infantry gun, Flakpanzer 38(t) anti-aircraft platform, Munitionspanzer 38(t) armored ammunition carrier, and Aufklärungspanzer 38(t) reconnaissance tanks. 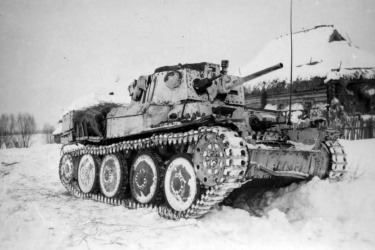