The Pandur II is an updated version of the earlier Pandur I, which was also designed primarily for the export market. Unlike the Pandur I which came with just one wheel configuration, the Pandur II comes in both 6 x 6 and 8 x 8 versions. Both feature all-welded steel providing protection against small arms and shell splinters with the option for additional protection up to 14.5-mm AP rounds, as well as spall liners for protection against mines; as an additional consideration against mines the troop seats hang from the hull sides. The Pandur II is equipped with a more powerful Cummins engine thus allowing similar speed to its predecessor despite the added weight and troop load of up to 12 infantrymen in the 8 x 8 versions. The powerpack can be changed in 15 minutes for ease of maintenance. Being an export-oriented vehicle, there are numerous armament configurations available including machine guns, autocannon, or even guns of up to 105-mm caliber. Many have been fitted with the Israeli-designed Samson RCWS remote weapon system that can be fitted with various types of guns. Existing vehicles have been largely adapted to national requirements of export clients which include the Czech Republic, Indonesia, and Portugal (and Austria). Czech units have been used operationally in Afghanistan.

Prototypes of the Pandur II were produced in 2001 and the first export customer was Portugal where aside from initial units, is license produced domestically by Fabrequipa as the VBR Pandur II (Viatura Blindada de Rodas). A dozen different variants exist including the basic APC version (some with a remotelly controlled gun), an IFV version with a 30-mm autocannon capable of also firing Spike LR ATGMs; another specialized anti-tank version is armed with TOW missiles. Other variants include mortar carrier, command post, recovery and maintenance vehicle, and medevac vehicle. Notably, a version for the Portuguese Marines uses a cargo ramp rather than rear doors. Czech variants are known as the Pandur II 8x8 CZ includes add-on passive armor and a slightly redesigned floor for added mine resistance. Many are equipped with the RCWS-30 remote weapons station with different armament configurations, including the KBVP IFV. Other versions include the KBV-Pz recon variant, KOT-VOV command post vehicle, KOT-Zdr ambulance, and KOT-Ž engineer vehicle. 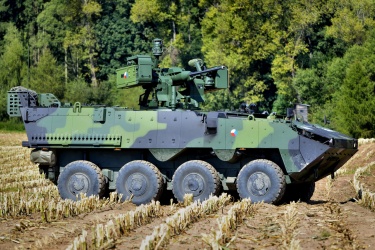