The Pandur I is the first of a series of wheeled APCs that began as a private venture originally based on the Spanish BMR-600. The original Pandur I is a 6 x 6 features an all-welded hull with protection against small arms but which can be installed with additional armor modules including with mine protection mats. The standard version the vehicle features a 12.7-mm machine gun with additional firing points on the sides of the rear troop compartment which can fit between 8-10 infantrymen depending on version. More recently, Austrian vehicles feature a remote weapons station. Layout is conventional, with the driver at left and the engine at the right; the whole powerpack can be removed in as little as 20 minutes thus easing maintenance. Mobility benefits from a central tire pressure regulation system which can be adjusted during movement. Given that it is geared for export, optional equipment configurations include NBC equipment, fire suppression system, air conditioning, and passive night vision. Different armament fit is available as well. A specialized amphibious version was also produced, with integrated waterjets for propulsion, as well as other features to improve buoyancy. Aside from Austria, the Pandur I was exported to Belgium, Kuwait, Slovenia, and the US. An updated version is known as the Pandur II and is described separately.

Two prototypes were completed in 1985 as a private venture. The basic Pandur I comes in the basis Type 330 APC as well as the lengthened Type 332 which is the basis for the amphibious version. Other versions include an armored ambulance, reconnaissance fire support vehicle, ATGM missile carrier, anti-aircraft, as well as command and communication carriers, some of which were only produced as prototypes. 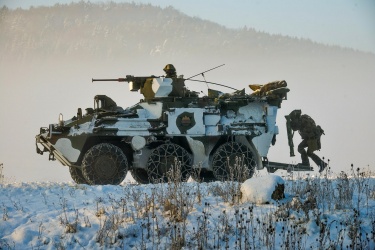