The BMR-600 is a wheeled APC that was built to meet the needs of the Spanish Army in the later part of the Cold War and remains the country's main vehicle of the type, along with the tracked US M113. The BMR-600 uses all-welded aluminum with spaced armor at the front which protects against rounds of up to 12.7-mm, and smaller caliber fire and shell splinters throughout. The basic APC version features a crew of two (driver and gunner/radio operator) and can accomody up to ten infantrymen in a rear troop compartment, which is accessed via a ramp as well as an emergency door. Up to six firing ports with vision blocks are also provided. Armament typically consists of a 12.7-mm M2 machine gun mounted on a cupola which allows full traverse. Other armament options are offered as well as the capability to mount a turret, ATGM launchers, and remote weapons stations. Mechanically, the BMR-600 features independent suspension and is fully amphibious, being propelled by twin waterjets (an optional feature). Other optional features an NBC system, night vision, smoke grenades, and air conditioning. The BMR-600 also formes the basis for the BMR-625 VEC cavalry reconnaissance vehicle which is armed with an M242 Bushmaster cannon and has other structural differences like a rear-mounted engine but otherwise shares most components and hull design. Export clients include Egypt, Mexico, Peru, Saudi Arabia, and Morocco. An Austrian-built derivative, the Pandur, is described separately.

Prototypes of what was known as the Pegaso 3500 were built in 1975 which resulted in the BMR 3560 (company designation), beating out the French VAB and Swiss Piranha in Spanish Army trials. Variants include the basic BMR 3560.50 APC, the BMR 3560.59E 81-mm and BMR 3560.59E 120-mm mortar carriers, the BMR 3560.55 armored recovery and repair vehicle, BMR 3560.54 ambulance, and BMR 3560.56 signals vehicles. The APC variant can also be adapted to different roles including various ATGM carriers, a combat engineer vehicle (BMR VCZ), NBC reconnaissance vehicle (BMR VRAC-NBQ), and an electronic warfare vehicle (BMR GEL). The BMR-625 VEC (Vehículo de Exploración de Caballeria) or BMR 3562 (company designation) is a cavalry reconnaissance vehicle armed with a variety of turrets although most vehicles have settled for an Otobreda TC25 turret armed with a Bushmaster autocannon. It is only in service with the Spanish Army. A later upgrade of both BMR-600/625 vehicles features a more fuel efficient Scania D9 diesel engine. 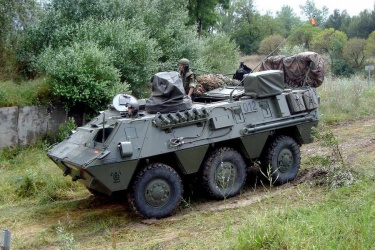 BMR-600: Production figures include all derivatives except BMR-625