The Yakovlev Yak-130 is a modern jet trainer and light attack aircraft that is intended to replace the ageing Czech-designed L-29/39 trainers that had been used as standard by Soviet and Warsaw Pact forces during the latter part of the Cold War (and later, by Russia). The original design of the Yak-130 took place in collaboration with Aermacchi; a rare case of Russian-Western co-development. However, the partnership later split with both companies producing similar but separate designs (the M-346 being the Italian version). Superficially, the Yak-130 resembles contemporary Western trainers, notably the BAe Hawk, but has a thoroughly modern avionics set including a full digital glass cockpit, fly-by-wire, HUD, and helmet-mounted sights. It is designed to replicate features of both fourth and fifth-generation aircraft, and as such, will be the main trainer used for the upcoming PAK FA stealth aircraft. According to Yakovlev, the Yak-130 can fulfill as much as 80% of the entire flight training program. Like most advanced trainers, the Yak-130 has light attack capability through nine external hardpoints. As with most Russian aircraft, the Yak-130 is being marketed for export, and has been adopted or ordered by Algeria, Bangladesh, Belarus and Syria with more export clients likely on the way.

First flight of the Yak-130 prototype took place on 26 April 1996, but only entered Russian service until 2009. Other proposed variants include the Yak-131 single-seat attack aircraft, Yak-131 recon aircraft and Yak-135 VIP transport. It is unclear whether any of these have been built. 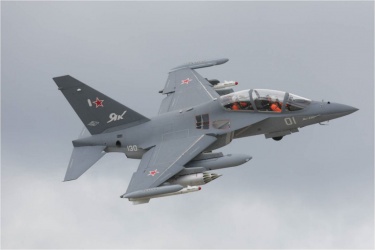