The Curtiss-Wright SB2C Helldiver became the US Navy's principal dive bomber beginning in late 1943, replacing the venerable Dauntless. Development was plagued with accidents and delays and required no less than 880 modifications before being accepted into US Navy service. The result was a aircraft that was considerably larger than its predecessor, with notable features being a bomb bay in order to reduce drag as well as leading edge slats. However, the aircraft was underpowered at first which made it difficult to handle, in turn giving it a number of unflattering nicknames by its crews such as 'The Beast'. It also suffered from shorter range than the Dauntless. Improvements over the course of its production run corrected many of its early issues and it eventually became a very capable aircraft which participated in all major naval clashes from 1944 onwards such as the Battle of the Philippine Sea, the Battle of Leyte Gulf, and the sinking of the Yamato. Aside from bombs, later versions could be fitted with rockets and it was also equipped with ASB and AN/APS-4 radar. Production of the Helldiver was also undertaken additionally in Canada and a small number were operated by Australia and Britain during the war although neither used them in combat. The obsolescence of dive bombing by the end of the war meant most USN aircraft were quickly phased out of active service but post-war users included France, Greece, Italy, Portugal, and Thailand. In the end, despite its contribution to the defeat of the Japanese Navy, the Helldiver found itself perennially overshadowed by its more famous predecessor, while the production difficulties during its development eventually contributed to the demise of Curtiss as an aircraft manufacturer.

The initial prototype XSB2C-1 was flown on 18 December 1940 but was destroyed by a crash leading to considerable production delays. It finally entered service as the SB2C-1 which continued to be plagued by teething troubles and thus did not see service. The SB2C-1C was the first to be used operationally and featured twin 20-mm cannons instead of machine guns. Development continued with the SB2C-3 which was equipped with a more powerful engine and a four-bladed propeller, the SB2C-4 which was capable of firing up to eight HVAR rockets and which was also produced in greatest numbers). The SB2C-5 was the final variant with increased fuel capacity in addition to having the ASB radar removed. It also featured a frame-less front canopy. Subvariants with a pylon-mounted AN/APS-4 radar were known as the SB2C-3E and -4E, though this was optionally carried on the SB2C-5 as well. Helldivers were also built in Canada by Fairchild (SBF) and Canadian Car and Foundry (SBW) for US service. It was also employed by the USAAF which dubbed it A-25A Shrike but most of these ended up in the hands of the USMC which designated it SB2C-1A. A handful of SBW-1B's were operated by the Royal Navy as the Helldiver Mk I. 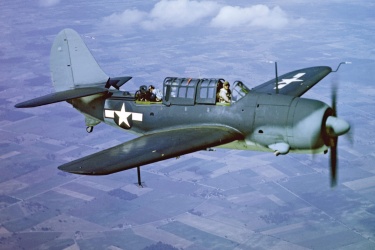