The Messerschmitt Me 210 was intended as a multi-role replacement for the Bf 110 heavy fighter, designed well before the concept had proven to be a failure in the early stages of the war. Similar in appearance, it was little better than its predecessor and was plagued with significant development and handling problems, so far that it almost cost Willy Messerschmitt his job (one test pilot even mentioned it had "all of the least desirable attributes an aeroplane could possess"). Development was therefore eventually halted in favor of the much improved Me 410 Hornisse (Hornet). This aircraft was used in many of the same roles as the Bf 110: as a heavy fighter, reconnaissance aircraft, night fighter and also in different duties like bomber-destroyer and radar-equipped anti-shipping strike flying over Britain, the Mediterranean, the Atlantic, the Eastern Front (also flown by Hungarian units), and in defense of the Reich. Fairly successful in this plethora of roles, it was nevertheless quickly removed as a daylight heavy fighter due to heavy losses, proving once and for all that the Zerstörer concept had been considerably flawed from the very beginning.

A Me 210V1 prototype first flew on 2 September 1939, production Me 210A-1s entered service in 1941 and featured remote-controlled aft-firing barbettes on the sides of the fuselage. Further variants included the Me 210A-2 fighter-bomber and the Me 210B-1 for photo reconnaissance. On the other hand, the Me 410 prototype first took to the skies in late 1942 and was followed by the Me 410A-1 light bomber and the 410A-2 Zerstörer. Variants included the A-1/U-1 for reconnaissance and the A-1/U-4 bomber-destroyer with a single Rheinmetall 50-mm gun, capable of knocking out a bomber with one hit. The improved Me 410B series mirrored its predecessor with regards to sub-variant designations but also included a torpedo fighter (Me 410B-5) and an anti-shipping fighter (Me 410B-6) with a FuG 200 Hohentweil radar. Some of the features in the Me 410 were subsequently added to unfinished Me 210 airframes, the new designation of these being Me 210C. 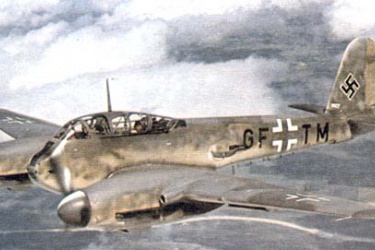