Designed by Dr. Alexander Lippisch, everything in the rocket-powered Messerschmitt Me 163 Komet (Comet) was unconventional: it had jettisonable landing gear and a toy-like propeller in addition to a futuristic tailless fuselage. More dangerous was the rocket mix of hydrogen peroxide and methyl alcohol/hydrazine hydrate which had a tendency towards premature explosion making it a particularly dangerous aircraft o fly. Takeoffs and especially landings (with no wheels) were formidable and so only the best Luftwaffe pilots were selected to fly the Me 163 in I/JG 400, the only unit to operate the aircraft. Combat endurance was short: between 8 and 12 minutes but it was enough to wreck havoc on B-17 formations in 1944 despite the fact too few were in action to make a difference. Nevertheless, the Me 163 will remain as testament as to how far the Luftwaffe went to combat the Allied bomber offensive during those last and desperate years of conflict.

Prototype Me 163V1s began flying as early as mid-1941 and entered service as Me 163B-0. These were armed with 20-mm cannon as opposed to the subsequent Me 163B-1s which were armed with 30-mm cannon, they first encountered B-17s on 16 August 1944. Other developments included the Me 163C with a new fuselage and cabin but was never produced, as well as the Me 163S two-seat glider trainer. A Japanese version by Mitsubishi was designated J8M1 Shusui but the program was abandoned after less than a dozen were built. 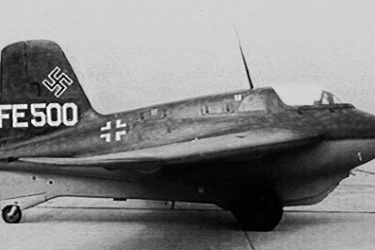