Arguably the most versatile aircraft of World War II, the Junkers Ju 88 was used for almost every role imaginable and was also the most widely produced German bomber ever. Serving in all theaters that the Luftwaffe was involved in, the Ju 88 level/dive bomber was superior to the He 111 and Do 17 (the other two principal German bombers during the early campaigns) and was the only one of the three to last throughout the conflict. Ju 88s were used as heavy fighters as early as the Battle of Britain, ground attack and anti-shipping bombers soon followed (ground attack variants could even carry 37, 50, and 75-mm cannons) while high altitude bombers and reconnaissance aircraft were also subsequently developed. Besides its success as a bomber, it's other mayor role was as a night fighter: radar-equipped Ju 88s could be airborne for up to 5 hours and could take a heavy toll of British bombers especially with Schrage Musik (Jazz Music) upward-firing cannon; in fact, Ju 88s were responsible for more enemy night bombers destroyed than all other types combined. Overall, the Ju 88 was worthy of its title as the "backbone" of the Luftwaffe (foreign operators of reconnaissance units included Hungary and Romania) and was undoubtedly one of the finest aircraft ever built.

A prototype Ju 88V1 flew for the first time on 21 December 1936 and entered service as the Ju 88A-1 which was available when the war began. The main bomber variant was the Ju 88A-4 and was continually improved up to the Ju 88S fast bomber of 1943 with nitrous oxide-boosted BMW 801G engines. Radar-equipped night fighter variants began with the Ju 88C-6b (developed from the Ju 88C heavy fighter which fought during the Battle of Britain) and the Ju 88R (same as the Ju 88C but with a different powerplant) although the main version would be the Ju 88G which was equipped with a FuG 227 radar and upwards-firing cannon which was to become the mainstay of the Luftwaffe's night fighter force during the last months of the war. Other variants included the Ju 88A-6/U and A-17 maritime attack aircraft, the Ju88A-13 and Ju 88P ground-attackers (the latter equipped with the heavy cannon configurations mentioned above as well as the solid nose of early aircraft) and the Ju 88H-2 heavy fighter while photo-reconnaissance variants included the Ju 88H-1 and Ju 88T. Perhaps the most interesting development of the Ju 88 was as a guided missile platform known as Mistel (Mistletoe) where an explosive-laden aircraft (usually a Ju 88H-3 or H-4) was flown towards target by a parent fighter. Few were actually launched with limited success. 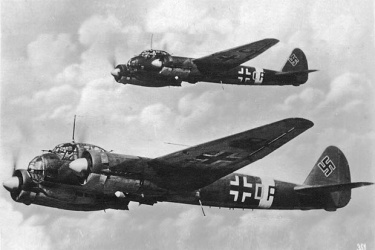