The Junkers Ju 86 was built as a civil airliner and military bomber more or less at the same time as the famed He 111 and at the time of its development was one of the most advanced aircraft in the world. Designed by a team led by Dipl-Ing Zindel, the Ju 86 replaced the traditional Junkers corrugated skin for a smooth fuselage with double-wing flaps and outward-retracting main gears. It eventually entered service and saw combat in Spain but was shown to be considerably vulnerable even against slow biplane fighters, something which necessitated a number of improvements which nevertheless still made it notably inferior to the He 111, by then the Luftwaffe's standard bomber. A number of Ju 86s were still in service at the time of the campaign in Poland but would not see much action afterwards except as high-altitude reconnaissance aircraft where they were immune to Spitfires over Britain due to their service ceiling. Foreign operators included Brazil, Chile, Manchuria, Portugal, Sweden as well as Hungary and South Africa which used them in combat during the war.

First flight of a converted civil prototype was on 4 November 1934 and entered service as the Ju 86A bomber followed by the Ju 86B transport. Improvements led to the Ju 86D, the most widely produced variant although experience in Spain led to a further powerplant change in the form of BMW 123 radials which powered the Ju 86E and Ju 86G. Reconnaisance versions began with the Ju 86P which began life as Ju 86D conversions. These were eventually produced as the Ju 86P-1 bomber and Ju 86P-2 high-altitude recon aircraft with three cameras and which flew with impunity over the British Isles until a number of Spitfire Vs were specially modified to shoot them down. A number of these were modified with longer wings and known as the Ju 86R while other versions included the export Ju 86K and the Ju 86Z civil transport. 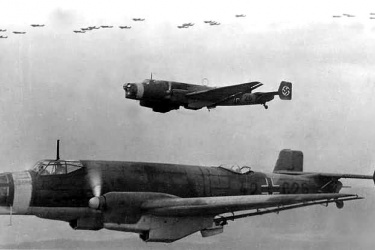