Like many ambitious yet flawed German designs of World War II, the Junkers Ju 290 was built to succeed a famous aircraft (in this case the Fw 200 Condor) but ended up unable to replace it and built in too few numbers to make an impact on the war effort. It was designed from the Ju 90 passenger airliner with main differences being a new wing and different radial engines. A large number of Ju 290 variants were built to service in a wide variety of roles but only with a few of each actually manufactured; among these roles were transport, maritime patrol, VIP transport (as Hitler's personal flight), reconnaissance, and even a missile carrier with even further developments in the works before the project was ultimately terminated during the final months of the war. In the event, the Ju 290 was used mostly for patrol duties and for agent dropping and hiding prominent Nazis after the surrender with a single Spanish aircraft obtained accidentally serving until the mid-1950s.

The civil Ju 90 was developed in 1937, one of these aircraft was modified into the first Ju 290V1 prototype which first flew early in 1939 although the first true Ju 290A-0 would not make its maiden flight until 1941. The extensive list of variants includes the Ju 290A-1 transport, the A-2 maritime patrol aircraft with increased fuel and defensive armament, the A-3 with more powerful engines, the A-4 with revised gun turrets and the definitive A-5 with increased armor protection and defensive amrament. Among further versions were the A-6 VIP transport, the A-7 and A-8 recon-bombers with missile-carrying capability, and the A-9 long-range reconnaissance aircraft with extra fuel. A long-range high-altitude prototype knows as the Ju 290B was built but never entered service. A number of former civil Ju 90s also participated in the war as transports in Norway, the Balkans, the Mediterranean, and the Eastern Front. 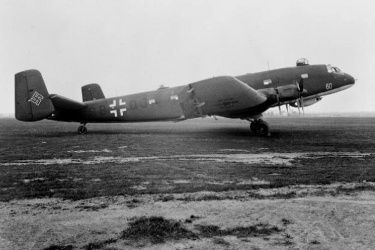