The Junkers Ju 252 was designed as a replacement for the legendary Ju 52/3m but ended up being built in too few numbers to make a difference in the war. Like its predecessor, the Ju 252 was designed with a tri-motor configuration but was considerably larger, faster, more powerful, and could carry a much larger load which included up to 32 passengers. Other differences included the lack of corrugated skinning which was a characteristic of the "Iron Annie" as well as an underfuselage ventral loading hatch. However, given the aircraft's high demands of strategic materials, less than a dozen were actually built and were used instead as cargo transports and for clandestine missions dropping Nazi agents. It's successor, the Ju 352 Herkules, was therefore built extensively of wood and was equipped with less powerful engines. Although built in larger numbers than the Ju 252 and used for transport, glider towing, troop carrying, and paratroop dropping, it never replaced the Ju 52/3m in Luftwaffe service.

The Ju 252 was designed in 1939 and was in the prototype stage when the war broke out in September of that same year. Initial production orders called for over two dozen Ju 252A-1 aircraft but less than half were actually delivered due to their high requirements of strategic materials. It's successor, the cheaper Ju 352 Herkules, first flew as the prototype Ju 352V1 on October 1943 and was built with mixed wood and steel tube construction with fabric covering. The only production variant of this aircraft became known as the Ju 352A-1 with only a trickle built. 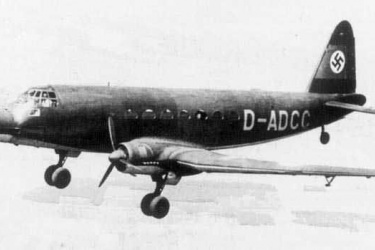