The Junkers Ju 188 was evolved from the Ju 88 family of bombers and typically served in the same types of bomber and reconnaissance roles. It was considered an interim aircraft pending the development of the abortive Ju 288 and as such the Ju 188 superficially resembled its predecessor albeit with a considerably larger and bulbous fully glazed nose, longer wings, and new BMW engines in the later variants. Ju 188s were first used as pathfinders against Britain in August 1943 and also served for photo-reconnaissance duties and as torpedo bombers until production was terminated in the spring of 1944, regardless of this they were to be found in action extensively during the remaining course of the war including both the Eastern and Western fronts, the Mediterranean and the Artic. Its successor, the larger and improved Ju 388, was built in small numbers during last year of the war and was optimized for high-altitude bombing operations although ultimately only recon versions were ever used operationally during the final months of war.

Developed from the Ju 88B, the first prototypes of the Ju 188 flew in early 1940 though it would take various years before production variants appeared. The Ju 188A series were equipped with Junkers Jumo 213A-1 engines and served as bombers (A-1) and torpedo bombers (A-3). The Ju 188E series were powered with BMW radials and also served in these two roles (E-1 and E-2 respectively) although interestingly enough, these versions entered production before the A series due to the unavailability of the original Junkers Jumo engines. Photo-recon variants included the Ju 188D, Ju 188F and Ju 188T. Its successor, the Ju 388 was built in three major versions: the Ju 388J night fighter, the the Ju 388K high-altitude bomber, and the Ju 388L photo-reconnaissance aircraft. Of these, however, only the latter ended up in service. 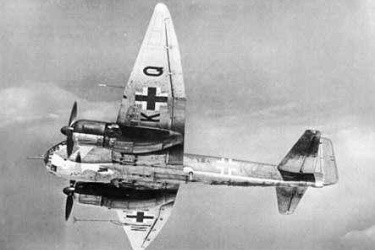