The Henschel Hs 129 was selected as the winner of the 1937 Schlachtgeschwader (Battle Group) specification for a conventional ground-attack aircraft specializing in the anti-tank role. Early units were unsatisfactory and were in fact handed over to the Rumanian Air Force but captured Gnome-Rhône engines were eventually fitted and greatly improved their capabilities. Hs 129s were used mainly in North Africa and the Eastern Front, where they earned a fearsome reputation as tank-killers: they featured a heavily protected cockpit and front (6 to 12 mm) and a variety of armament combinations including 4-kg SD4 hollow-charge bombs, 280-mm rockets and even a massive 75-mm BK cannon, one of the largest caliber guns ever carried on an aircraft. Used up until the end of the war, too few Hs 129s were built to make a difference despite the enormous damage they could inflict on opposing tank forces. Other users of this fearsome machine included Hungary and Romania.

The Hs 129V1 prototype was first flown in 1938. Hs 129Bs were the first to incorporate Gnome-Rhône radials and included the Hs 129B-1/R2 with a MK 101 30-mm cannon in the nose. Later, the Hs 129B-2 was armed with a 37-mm cannon and finally, the Hs 129B-3 featured a massive 75-mm anti-tank cannon which protruded 8 ft from the nose. These were not the only armament combinations carried as other subvariants were equipped with light anti-personnel and fragmentation bombs as well as different caliber guns. 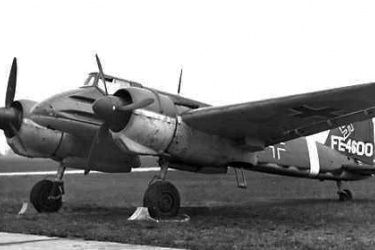