An indispensable component of the Blitzkrieg was battlefield reconnaissance, and in this role the Henschel Hs 126 performed admirably during the first years of the war. The Hs 126 was used in combat as a spotter during the Spanish Civil War and later was prominently featured in the Poland, French and Eastern Fronts for army co-operation duties, it was also used as artillery spotters thanks to their excellent radio equipment and in the photo-reconnaissance role. On the Eastern Front, Hs 126s were eventually retired from daylight service as the Luftwaffe's air superiority slowly eroded, they were then relegated to secondary roles such as target towing or anti-partisan operations in occupied territory though they also found some use in nocturnal harassing raids. Foreign operators of this aircraft were Bulgaria, Croatia, Spain, and Greece which used them considerably during the Italian invasion of 1940-41.

First flown in late 1936 as the prototype Hs 126V1, this Henshel design entered service as the Hs 126A-1 in Spain. By the outbreak of war in 1939 the major production variant had been settled as the Hs 126B-1 with more powerful Bramo engines and with superior radio equipment. This model was used in the early campaigns as spotters for Panzer forces and other reconnaissance roles. 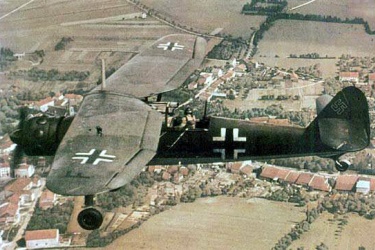