Of the first requirements of the reborn Luftwaffe in 1933 was that of an interim dive bomber. The Henschel Hs 123 biplane was selected for this Sofort-Programm specification and was unique by measure of its all-metal construction, something quite uncommon at the time. It could be fitted with four 50-kg or one 250-kg bomb between the fixed landing gear, however once it entered service in Spain (where it was also operated locally) it was more frequently used as a close support aircraft, eschewing it's dive bomber role. As one of the last biplanes in service with the Luftwaffe, it served in practically all fronts as late as 1944 and were rather successful during the opening months of the Russian campaign where it could operate with little opposition. Its ability to deliver its payload with pinpoint accuracy and its rugged nature made it no surprise why it was still in service as late as 1944 despite the fact that the production run ended half a decade before.

The Hs 123 was first flown in May 1935 and its only major production variant was the Hs 123A-1 which entered service in mid-1936 and served both in Spain and World War II until being retired in 1944. On the Eastern Front, they were often fitted with 92 2-kg anti-personnel bombs or 20-mm cannon and was even considered for a second production run until such a plan proved impractical. Prototypes were built for the planned Hs 123B (improved engine) and Hs 123C (more powerful armament) but these never entered production. 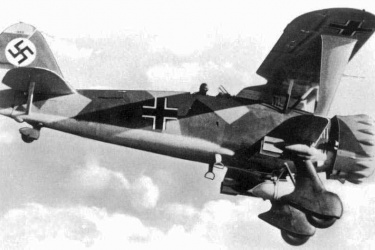