Arguably the best night fighter of the war, the Heinkel He 219 Uhu (Owl) was the ultimate scourge of RAF bombers after 1943. With speed, powerful armament, and advanced radar (most He 219s were equipped with the FuG 220 Lichtenstein SN-2), it was not uncommon for He 219s to bring down 5 or 6 Lancasters a night as well as shooting down their hitherto invulnerable Mosquito escorts (it is estimated that 60% of all night fighter Mosquitoes destroyed were done in by He 219s). Development was delayed due to a RAF raid on Rostock which destroyed much of the design drawings but once in service the He 219 proved its effectiveness armed with a variety of gun combinations, including the deadly Schrage Musik (Jazz Music) upward-firing cannon although there were issues of reliability on account of structural and engine problems. Sadly, production was hampered by German bureaucracy which seemed to prefer newer but untried (and eventually unsuccessful) designs, none of which came close to matching the superb capabilities of this excellent aircraft.

The He 219V2 prototype first flew on 15 November 1942. The first mayor variants were the He 219A-2, the He 219A-5, and later the He 219A-7 which upped the armament to include eight cannon including two upward-firing 30-mm Schrage Musik guns. The He 219A-7/R6 was equipped with a 2,500-hp Jumo 222A/B engine and could reach the incredible speed of 435 mph, faster than most single-engine fighters of the time. Lastly, the He 219B and He 219C series would have been multi-role aircraft with rear turrets but these never reached the production lines. 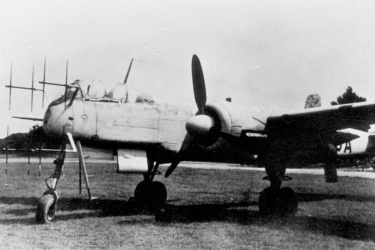