The Heinkel He 177 Greif (Griffon) was the only heavy bomber developed by Germany during World War II. The original 1938 specification called for a heavy bomber capable of dive bombing as well as incorporating a wealth of new technologies which led to so many production difficulties and prototype crashes that the aircraft was given the unflattering nickname "Flying Coffin". Although it appeared to be twin-engined, the He 177 actually housed a pair of linked engines on each wing, such a configuration being inherently unstable and the cause of many a crash. He 177s began attacks against Britain in 1942 but were only used in number after 1944, mainly on the Eastern Front where on one occasion they trailed a US bomber formation after a shuttle-raid and bombing the Russian airfields where these aircraft landed. He 177s were used for anti-ship strike, missile carriers (mostly in the Mediterranean and Atlantic), heavy fighters and was even modified as an atomic bomb carrier, such versatily proving what could have become of this design had it been developed under less ridiculous requirements.

A prototype He 177V1 was first flown on 19 November 1939 but only entered service as the He 177A-1 until mid-1942. Sub-variants included He 177A-3/R3 Hs 293 carriers, A-3/R7 torpedo bombers, and A-3/R5s which were armed with a 75-mm cannon. The He 177A-5 was the ultimate bomber version, some employed (incredibly) as heavy fighters while the atomic bomb carrier was designated He 177V38. Heinkel themselves developed various improved versions of the aircraft (unbeknownst to the German government) which included the four-engined He 277 and the almost completely re-designed He 274 high-altitude bomber. 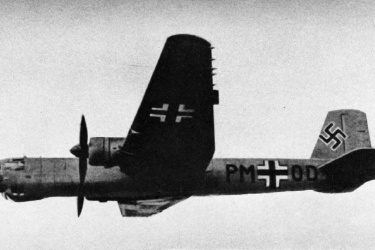