The Heinkel He 162 Salamander, also known as the Volksjäger (People's Fighter), was Germany's second operational jet fighter which entered during the final year of the war, it had been designed to fulfill an "emergency jet" requirement to try and stem the tide of the bomber offensive which was ravaging German cities. Because of this, the small He 162 was designed in a record 37 days before its first flight and was composed from non-strategic materials in underground factories, mainly wood. However, this rapid development did not translate into a particularly effective design: it was meant to be flown by hastily-trained Hitlerjugend pilots (whose only previous flight experience was on gliders) but ended up being an extremely difficult and dangerous aircraft to fly. A substantial number of aircraft were built, but lack of fuel meant that probably none of them ever flew in combat despite entering operational service in early 1945. Overall, the He 162 was an extreme example of the technical capabilities of the German aircraft industry overburdened by the desperate requirements of impending military defeat.

The He 162 was test flown on 6 December 1944 just over a month after it had been conceived on the drawing boards, an amazing feat considering the technological sophistication of jet aircraft at the time. Produced as the 162A-1 and A-2, the main difference was a fixed armament of 30-mm or 20-mm cannon respectively. Over 800 were in left incomplete when the war ended and only reached one operational squadron 1/JG at Leck before the war ended. 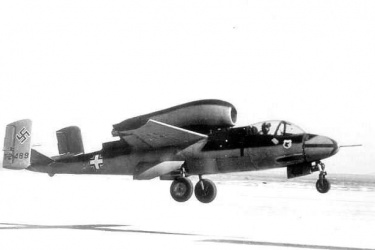