The Luftwaffe employed two main float-plane designs during World War II, by far the best of these and one of the finest to serve in the European theater was the Heinkel He 115. Its prototype broke a number of speed records for its type when first tested and was originally intended for coastal patrol but its potential was realized throughout constant upgrades which improved bomb load, range and armament thus turning it into a very effective maritime aircraft employed in a myriad of roles. He 115s were eventually able to also operate from ice and snow making them perfect for artic duties, among the He 115's other major actions was the mine-laying of British coastal waters and the devastating attacks on the Russian-bound PQ convoys of 1942. Foreign users included Bulgaria, Finland, Norway, and Sweden in addition to Britain which used a number of captured examples for covert duties such as agent dropping in the Mediterranean and North Africa.

The prototype He 115V1 was first flown in October 1936 and entered production two years later as the He 115A. Poorly defended, it was upgraded in the He 115B of which the B-2 subvariant was equipped with the then-new German magnetic mine as well as the He 115C series of which the C-3 was a minelayer and the C-4 a torpedo bomber. A small number of four-engine He 115D were also built as well as some He 115E multi-purpose aircraft, these were surprisingly built 18 months after production of this aircraft had ceased. 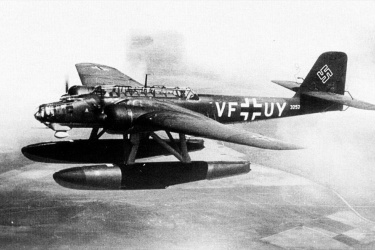