The Heinkel He 111 was Germany's principal bomber during the first years of the war, along with the Do 17 and Ju 88 it formed part of the trio of Luftwaffe medium bombers avialable when the conflict began and undoubtedly one of the most advanced aircraft of the 1930s. The He 111 had originally served in the Spanish Civil War and during the campaigns of 1939-40 was quite effective due to minimal aerial opposition something which gave it a false sense of invulnerability in the face of the slower fighters it encountered. However, the Battle of Britain changed this assumption: although the glazed-nosed He 111 with elliptical wings became forever a symbol of the nighttime Blitz, they were proven to be inadequately armed and suffered at the hands of the RAF perhaps more than any other Luftwaffe bomber, its only defense being the extreme ruggedness which allowed it to take vast amounts of punishment. Still, He 111s served in most fronts even in the face of obsolescence as the Luftwaffe was incapable of finding a suitable replacement, they met some success in the Mediterranean as torpedo bombers and also on the Eastern Front whenever the Luftwaffe was able to maintain air superiority. He 111s continued to be built after the war in Spain and were also used by China, Hungary, Romania, Slovakia, and Turkey.

The prototype He 111V1 first flew on 24 February 1935, it entered production as the He 111B which served in Spain and was followed by continous improvements in the He 111D and E, these all featured a traditional stepped cockpit windscreen. The first version with straight leading edges was the He 111F and later, the He 111P incorporated the distinctive fulled glazed nose which became characteristic of this aircraft. The definitive variant, however, was the He 111H which continued in production until late 1944, among these were the H-6 which could carry torpedoes, the H-16 with more powerful armament, and the H-22 flying bomb carrier. Pathfinder variants included the H-14 and H-18. A rather strange design was the He 111Z Zwilling (Twin) which was actually a pair of He 111s joined together and were used to tow Me 321 Gigant gliders. 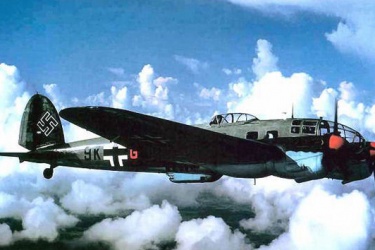