The Gotha Go 242 was the principal transport glider used by the Luftwaffe after 1942. Designed by Albert Kalkert, this twin-boomed design of moderate capabilities and simple design served on all fronts, notably the Mediterranean and the Eastern Front where it was constantly pressed to supply beleaguered German units during the campaign. It was eventually decided to transform the aircraft into a twin-engined transport using captured French Gnome-Rhône engines on the front of the twin booms. This new aircraft, designated Go 244, could carry 21 troops, stores or light vehicles but were not completely successful on account of their underpowered engines and their vulnerability against enemy fighters which resulted them in being relieved from front line duty where they had served in limited numbers in the North African and Russian campaigns.

The first glider variant known as the Go 242V1 flew early in 1941 and production aircraft were designated Go 242A. The Go 242B series included a fixed nose-wheel undercarriage and some of these, the Go 242B-1 and B-2 were built for airborne operations. The addition of Gnome-Rhône engines resulted in the Go 244B transport, most were eventually scrapped although some were kept for paratroop training duties. 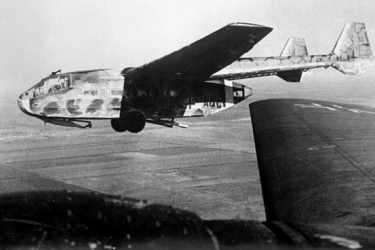