Designed by Kurt Tank, the Focke-Wulf Fw 200 Condor had already made headlines in the pre-war years as a very successful civil airliner, shattering many world flight records in the process. Graceful and elegant, it was converted into one of the war's most feared anti-ship aircraft, so much that it was called "the scourge of the Atlantic" by Winston Churchill. The Fw 200 began service as a maritime reconnaissance aircraft but soon began mine-laying duties off the British coast, its range making it more than adequate for long-range Atlantic patrols and was fairly well defended also; an example of their effectiveness is that during the second half of 1940, Fw 200s sank 360,000 tons of Allied ships. Unfortunately, structural problems led to some service accidents but overall, the Fw 200 was a reliable aircraft until the introduction of long-range aircraft and escort carriers ended its dominance over the Atlantic sea lanes. Among its other roles was that of Hs 293 missile-carrier and transport, nevertheless its potential as a four-engine strategic bomber was never realized.

The Fw 200 was designed in 1936 and first flew on 27 July 1937. It entered production as the Fw 200C and could be armed with either bombs or mines. Sub-variants differed mostly in terms of armament although the Fw 200C-3 featured a more powerful engine and the Fw 200C-6 and C-8 could carry two Hs 293 guided missiles. Some Fw 200s were also used as transports during the siege of Stalingrad and a few were converted into VIP transports, both Hitler and Himmler having one for their personal use. 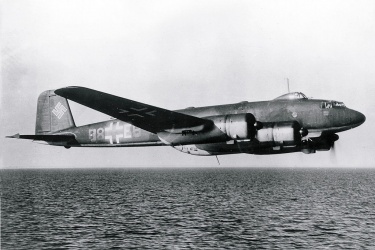