The Fieseler Fi 156 Storch (Stork) was one of the most remarkable small aircraft of the war where it served in a plethora of battlefield roles including aereal observation, air ambulance, ground support but especially as a liaison aircraft. It's success lay in its excellent pilot visibility, as well as STOL capability which allowed it to land and take-off from practically anywhere. Nevertheless its performance figures were nothing spectacular, in fact, it was slow, frail, and had very little range yet it excelled at its intended roles and was used by practically every Axis nation as well as Sweden, Switzerland, the USSR who copied the design (post-war production continued in France and Czechoslovakia), and even Britain which took control of numerous captured units one of which ended up as Field Marshal Montgomery's personal aircraft. The Fi 156 was used to drop shock troops ahead of armor units at the beginning of the war but perhaps its most daring and memorable accomplishment was the rescue of Benito Mussolini from the Gran Sasso mountain range following the Italian surrender. Production continued by Morane-Saulnier in France and Mraz in Czechoslovakia after the war. 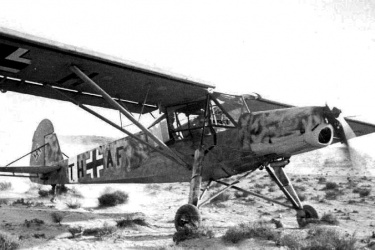