The Dornier Do 217 was designed as an improvement over the venerable Do 17 but ended up becoming a whole new family of aircraft, with the bomber variants considered some of Germany's best of the war. Superficially, it resembled its predecessor, yet it was noticeably larger and eventually modified with a fully glazed rounded nose as well as considerably more powerful engines and was employed in a variety of roles including heavy bombers, anti-shipping, reconnaissance and night fighters. Do 217s carried an impressive bomb load for their size: almost 9,000 lbs as external stores and in an internal bay (the heaviest payload carried by a Luftwaffe bomber at the time) in addition to being able to carry Hs 293 or Fritz X anti-shipping missiles which were used to score hits on the HMS Warspite and the Italian battleship Roma in the Mediterranean. Unfortunately, few Do 217s were built (preference given later to the aborted Do 317 high-altitude bomber) despite their fearsome capabilities as demonstrated over Britain and the Mediterranean where they were most active.

The Do 217V1 prototype first flew in August 1938 and pre-production Do 217A-0 were used for clandestine reconnaissance flights over the Soviet Union as a prelude to invasion. The first major production variant was the Do 217E with a variety of armament combinations, among which was the Do 217E-5 which could carry two Hs 293 anti-ship missiles. Subsequent improvements resulted in the Do 217K and Do 217M which were the first to feature a fully glazed nose and could be armed with Fritz X stand-off missiles. night fighter variants included the Do 217J and Do 217N (many of these were conversions of Do 217E/M airframes), the latter with two 20-mm upward-firing cannon in the nose. Lastly, the Do 217P was a very high altitude bomber with a pressurized cabin and a third fuselage-mounted engine but never reached past the prototype stage. 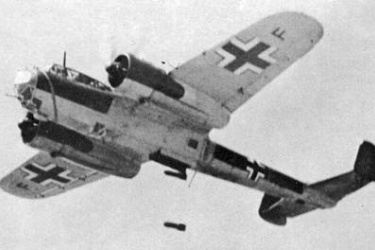