The Dornier Do 18 was an unusual flying boat, distinguishable by tandem push/pull engines fitted above a high strut-mounted wing which was based on a previous Dornier trans-Atlantic mail-carrier for Lufthansa (known as the Wal) which it was scheduled to replace. The Do 18 entered service before the war began and was mainly used for reconnaissance duties over the North Sea and the Baltic (sometimes being painted in a white colur scheme with red crosses to give the impression it was operating as an aerial ambulance) even though it was a rather unsatisfactory design suffering from poor defensive armament and underpowered engines which made it highly vulnerable to enemy fighters and heavily-armed patrol aircraft. Not surprisingly, it was the first German aircraft to be shot down by the British (by Blackburn Skuas from HMS Ark Royal) on 26 September 1939 and was eventually superseded by superior flying-boat designs such as the Do 24 and Bv 138.

The prototype Do 18V1 was first flown on 15 March 1935 and the initial military production variant Do 18Ds entered service in September 1938. Other variants included the Do 18G which had increased armament including a 20-mm cannon, and the Do 18N air-sea rescue aircraft. Civilian versions of the Do 18 (which preceeded the Do 18D) were designated Do 18E and Do 18F. 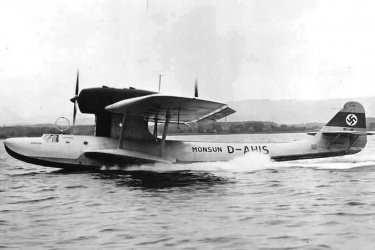