Nicknamed the "Flying Pencil", the Do 17 bomber was developed from a fast mailplane requirement for the Lufthansa airline but rejected because of a lack of cabin volume. It subsequently entered service with the Luftwaffe in 1937 and saw action during the Spanish Civil War and the early stages of World War II where its speed and operating altitude made it difficult to intercept. It was during these campaigns where the Do 17 was found to be lacking in armament and crew armor so later models featured a deepened glazed nose with additional machine guns. During the Battle of Britain, Do 17s were found to be less vulnerable than He 111s on account of their excellent maneuvrability but still suffered heavily and by 1942 the type had been replaced by more modern bombers despite having seen further action over the Balkans, Greece and the USSR. Like many other German twin-engined aircraft, the Do 17 was also employed as a night fighter though it is definitely better known for its bomber role. Foreign operators included Croatia, Finland, Hungary, Spain, the USSR, and Yugoslavia.

The Do 17 prototype flew in the autumn of 1934 and early production variants, the Do 17E bomber and Do 17F photo-reconnaissance aircraft served in Spain. These were further improved in the Do 17M and Do 17P with the same respective roles. The most important variant, however, was the Do 17Z with a redesigned nose and various combinations of armament, it was the most widely used version of the Do 17 at the start of the war and accounted for the bulk of overall production. night fighter variants included the Do 17Z-6 and Do 17Z-10 Kauz ("Screech Owl") armed with two 20-mm cannon and four 7.92-mm guns, these were but two of the many subvariants of the Do 17Z family of which trainers and maritime-reconnaissance aircraft were also produced. An export version with 1,075-hp DB 601 in-line engines was designated Do 215 and also used by the Luftwaffe. 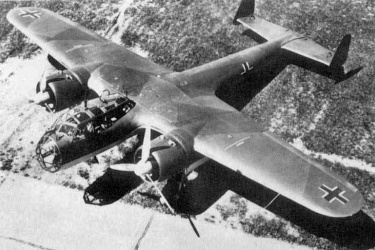