The Blohm und Voss Bv 138 was a promising three-engine flying boat design which was slated to replace the lackluster Do 18. It was known (rather unflatteringly) to its crew as the "Flying Clog" because of its uniquely designed hull but nevertheless enjoyed good performance after entering service early in the conflict. Among its other duties, the Bv 138 performed as a reconnaissance platform, minesweeper, mine-detector, as well as rescue aircraft; with an endurance of 18 hours it was perfect for rendezvous and refuelling missions with U-Boats at sea. It was eventually joined in service by the Do 24, with both aircraft becoming the mainstay's of the Luftwaffe's flying boat fleet throught the war in most theaters, particularly over the North Sea and the Baltic where they contributed considerably to the shadowing of Allied convoys heading to Russia and reporting their positions to surface units and U-boats.

First flight of the Bv 138 (originally known as the Ha 138) was on 15 July 1937 but production models only entered service until early 1940. The initial Bv 138A model was continually plagued by service difficulties which forced most of them to be converted into transports, fortunately most of these problems were successfully resolved in the Bv 138B and the definitive Bv 138C which formed the bulk of production. A minesweeper variant was also developed, it was designated as the Bv 138MS. 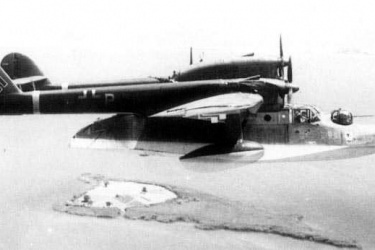