Undoubtedly the crowning achievement of the German helicopter industry, the MBB Bo 105 has been one of the most successful light helicopters ever made and the basis for a number of more modern designs. The Bo 105 was intended for both military and civil use and features a conventional configuration based on a twin-engined powerplant, a four-bladed main rotor, skid landing gear, and an instantly recognizable rounded nose. It is particularly suitable for light utility missions (aided by clamshell doors in the rear) as well as reconnaissance, liaison, and search and rescue (SAR), in addition to light attack roles in which it can be equipped with guns, rockets, and anti-tank missiles. The Bo 105 was the German Army's primary anti-tank helicopter until being replaced recently by the Tiger, and has been extensively exported to over 20 countries many of which use it for coast guard, law enforcement, and firefighting.

First flight of the Bölkow Bo 105V-1 prototype took place on 16 February 1967 and entered production as the Bo 105C, later developed as the Bo 105CB with an uprated powerplant and all-weather operation. Military versions began with the Bo 105M liaison and light observation helicopter with various structural improvements and later, the Bo 105P (also known as the PAH-1), a dedicated anti-tank version of the Bo 105M capable of carrying HOT missiles. More recent versions include the Bo 105CBS-4 (civil) and CBS-5 (military/naval) with increased cabin space and improved avionics. 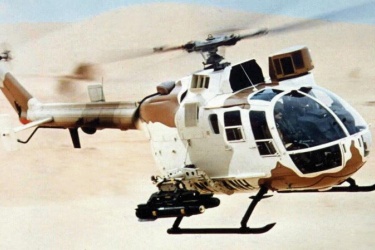