The Messerschmitt Bf 110 was originally intended as a heavy escort fighter or Zerstörer (Destroyer), an innovative concept that had gained popularity during the 1930s and which called for an aircraft which would sacrifice maneuvrability for long range and a powerful punch which would serve it well as a bomber escort deep into enemy territory. The Bf 110 saw considerable success during the opening campaigns against Poland and France but despite being fast and relatively well armed it proved a failure during the Battle of Britain on account of its lack of agility which placed it at the mercy of the more nimble Spitfires and Hurricanes. Bf 110s were thereafter employed as fighter-bombers, a role to which it was better suited especially in the Mediterranean and Eastern Fronts where they faced lighter opposition. Later in the war, the Bf 110 was turned into a superb radar-equipped night fighter becoming the Luftwaffe's most widely used from 1943 to 1945 and in the process more than making up for its poor initial reputation which has unfairly tarnished its service history. Additional Axis users were Hungary, Italy, and Romania (of of which operated the night fighter variants).

The Bf 110 was first flown on 12 May 1936 and production variants began with the Bf 110B in 1938. The Bf 110C was introduced shortly before the war began and was used extensively in the Battle of Britain where it was at the mercy of the more nimble single-engined fighters of the RAF, subvariants were distinguished mostly through different equipment setups although the Bf 110C-7 was the first fighter-bomber version built. Later, the Bf 110D included night fighters, fighter-bombers and long-range convoy escorts, these were followed by the Bf 110E which had underwing and underfuselage bomb racks. The Bf 110F series boasted more powerful engines and was notable thanks to the Bf 110F-4 night-fighter which would serve as the basis for all further Bf 110s in that role (it incorporated a third crew member, additional cannon and FuG 202 radar). These new aircraft began with the Bf 110G employed in all previous roles as well as the Bf 110H, similar to its predecessor albeit with minor alterations to the nose and fuselage. 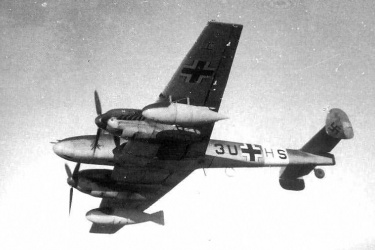