Too little, too late, the Arado Ar 234 Blitz (Lightning) was the first operational jet bomber in the world and was so revolutionary that it was the only one of its type deployed during World War II. Reconnaissance variants entered service in mid-1944 and were later joined by bomber versions later that same year and produced quite a shock to Allied fighter pilots who were hard pressed to intercept them. Ar 234s were used over Britain, Italy, and Europe during the final months of the war but were mostly remembered during the Battle of the Bulge and later over the Rhine river crossings where, escorted by Me 262 jets, they tried unsuccessfully to destroy the Remagen bridge. The Ar 234's speed made it immune to interception by Allied fighters, going to show what could have been possible had the Luftwaffe been able to deploy this remakable arircraft earlier. Among other innovations in the Ar 234 was a pressurised cockpit, pilot ejection seats, autopilot, and a bombing computer.

First flight of the Ar 234 took place on 15 June 1943 with a jettisonable trolley undercarriage which was eventually replaced in later prototypes. Two main versions of the Blitz were built, the twin-engined Ar 234B and the four engine Ar 234C of which only a trickle were ever produced. Pre-production models of the twin-engine variant began with the Ar 234B-0, entering service as the Ar 234B-1 reconnaissance aircraft and the Ar 234B-2 bomber which together accounted for the bulk of production. 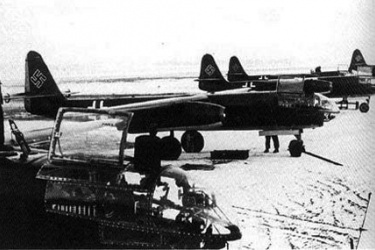