The largely unsung Arado Ar 232 is considered by many to be the first true modern transport aircraft, incorporating many of the features which would now be commonplace on aircraft of its type. It was aptly nicknamed Tausendfüssler (Millipede) due to a total of 22 support wheels which allowed for easier landings on rough or unprepared airstrips and was also configured with high-mounted wings and rear-loading clamshell doors in the rear fuselage with a ramp for loading cargo, its twin-boom design also allowed for greater space thus allowing vehicles to drive directly into the cargo hold, something which was impossible in any other major transport before it. Unfortunately, by the time it was developed, the Luftwaffe's priorities lay elsewhere and it was not put into mass production despite having been intended to replace the Ju 52/3m (it could carry twice the payload and at faster speeds). Only a trickle of Ar 232s served with the Luftwaffe but they were to inspire a whole new generation of transports during the post-war era.

The prototype Ar 232A first flew in June 1941 and was followed by the pre-production Ar 232A-0 which was later used operationally and which had BMW 801 engines which were substituted for BMW Bramo engines in the Ar 232B. Other experimental variants included the AR 232C (later redesignated Ar 432) with wooden outer wing sections and control surfaces and the Ar 532 and Ar 632 with two more engines and considerably greater wing spans. 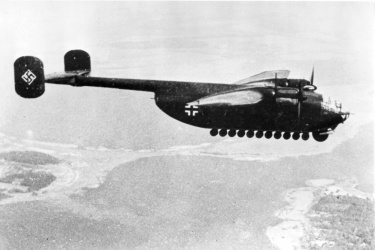