The A310 MRTT (Multi-Role Tanker Transport) was the first major conversion of an Airbus civilian airliner into military use. It was derived from a requirement by the German Luftwaffe for an aircraft that could fulfill the role of aerial refueling tanker as well as a strategic transport (some A310s were already in use as transports). However, Canada was the first to utilize the A310 for a similar role and eventually some of its existing units were modernized into MRTT standard. In the tanker role, it is equipped with twin refueling pods, one under each wing in addition to extra fuel tanks and additional fuselage and cockpit modifications. A flying boom refueling system can also be fitted although this not used on current aircraft in service. As a transport, it can carry troops, VIPs, and cargo, and has a larger cabin than similar aircraft based on the Boeing 707 (like the US KC-135). The Luftwaffe is currently the only operator of the A310 MRTT although Pakistan has expressed interest. Canada operates five A310 conversions which are known as the CC-150 Polaris.

First flight of the converted A310 MRTT took place in December 2003 and was delivered to the Luftwaffe the following year. In Canadian service, the aircraft is known as the CC-150 Polaris and was in use since 1997, although two were converted to MRTT standard in 2004. 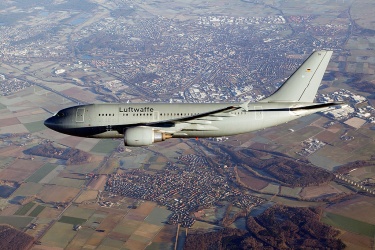