As the last major design by the great Ed Heinemann, the Douglas A-4 Skyhawk was one of the best examples of cramming the most capabilities into the smallest possible airframe for the intention of replacing the venerable A-1 in service with the US Navy's carrier fleets. It was given a number of nicknames throughout its career such as 'Heinemann's Hot Rod' and 'Scooter'; its design was characterized by small delta wings (thus eliminating the need for folding wings), side-mounted intakes, and a cruciform tail. Another notable feature was the inclusion of a buddy system of inflight refuelling thus eliminating the need for specialized tankers. Skyhawks were prominent during the early stages of the Vietnam War as the primary USN light attack aircraft until replaced by the larger A-7. Foreign Skyhawks also saw considerable action: Israeli units were used during the Yom Kippur War while Argentinian aircraft saw action in the Falklands sinking or damaging numerous British ships. More recently, Kuwaiti units were flown against Iraq during the 1991 Gulf War. Other foreign operators of the A-4 include Argentina, Brazil, Indonesia, Malaysia, New Zealand, and Singapore. Although USN A-4s were retired from front-line service in 1975, they continued to fly in various support roles, most notably as a special aggressor trainer aircraft.

The first flight of the prototype XA4D-1 took place on 22 June 1954 followed by the production A4D-1 (known after 1962 as the A-4A) which were the first to equip USN squadrons. Later, the A4D-2 (A-4B) had a new version of the J65 engine, aerial refuelling, and a number of structural improvements and was also given all-weather capability in the radar-equipped A4D-2N (A-4C). These would later be upgraded to A-4L standards with new engines and a dorsal hump housing new avionics. The next series of Skyhawks began with the A4D-5 (A-4E) with J52 engines, new structures, and additional hardpoints. The last USN version was the A-4F with a similar dorsal hump as the A-4L among other improvements while the A-4M Skyhawk II was built for the USMC with new modern avionics and what was said to be a 30 percent improvement in combat efficiency to its predecessors. Exported versions were generally based on their US counterparts, these were the A-4P and -4Q for Argentina (based on the B and C) and the A-4G (Australia), A-4H (Israel), A-4K (New Zealand) all of which were based on the A-4F. The A-4M resulted in the A-4N (Israel), A-4KU (Kuwait), A-4AR (Argentina), and the AF-1 (Brazil). Numerous other trainer versions were built including the TA-4E, -4F, and -4F as well as similarly designated versions of foreign aircraft. while a forward air control variant was known as the OA-4M. 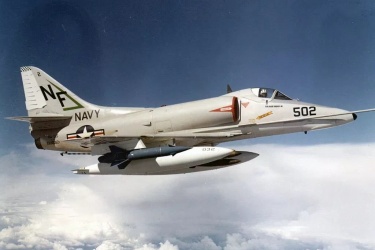