No better proof that piston-engined aircraft were still able to thrive in the jet era exists than the Douglas A-1 Skyraider. The "Spad", as it was called, was originally designed during World War II as a carrier based successor to the legendary Dauntless and combining the roles of dive bomber and torpedo bomber which had previously required different aircraft (similar capability existed in the contemporary AM Mauler). In the end, however, the Skyraider became not only an outstanding attack platform but was also used for early warning, anti-submarine, and electronic warfare in a service life which lasted until the 1970s, long after almost every other piston-engined tactical aircraft had been retired. Skyraiders performed the bulk of the US Navy and USMC's strike missions during the Korean War and went on to see additional service during the Vietnam War also: its ability to carry a substantial weapons load (on no less than 15 hardpoints) and to loiter over the battlefield gave it a distinct advantage compared to early jets, so much that it was even adopted by the USAF; a rare move considering the often strong inter-service rivalries that exist. Foreign operators included Cambodia, Central Africa Republic, Chad, France, Gabon, South Vietnam, and the UK, with the last US units retired only until 1972. 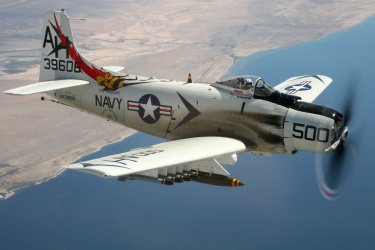