The Warrior was designed to replace the FV 432 APC in service with the British Army, the last among the major NATO powers to field a modern infantry fighting vehicle. A key requirement for the Warrior was to be able to keep up with the Challenger 1 MBT, as well as to provide greater protection than previous APCs thanks to an all-welded aluminum hull as well as appliqué armor when operating in combat zones. Layout of the Warrior is similar to contemporary IFVs, particularly the US M2 which was developed roughly at the same time, and can carry eight fully-equipped troops (including the vehicle commander) that dismount through a power-operated door in the rear. Armament is provided through a RARDEN 30-mm cannon, but unlike the M2, there is no provision for an anti-tank missile launcher except in export variants. The Warrior also lacks amphibious capability which was seen as unnecessary, but features NBC protection. The Warrior has seen extensive action with the British Army, initially in the 1991 Gulf War where they performed well, and later in the former Yugoslavia. The only export customer has been Kuwait.

The Warrior began life from a 1967 proposal for a future APC, which resulted in the MCV-80. This beat out the XM2 Bradley prototype for a British Army order, with initial prototypes built in 1984 and service entry in 1987 where they were shortly deployed to the British Army of the Rhine in the final years of the Cold War. British Army variants include the basic FV510 Warrior MCV section vehicle, FV511 Warrior ICV (Infantry Command Vehicle), FV512 Warrior MCRV (Mechanised Combat Repair Vehicle), FV513 Warrior MRV(R) (Mechanised Recovery Vehicle, Repair), Warrior MAOV (Mechanised Artillery Observation Vehicle), and FV515 battery command vehicle, while some were fitted with MILAN ATGW launchers. The export-oriented Desert Warrior features some changes to the basic British versions, notably the installation of a LAV-25 turret with a 25-mm M242 chaingun, and a TOW ATGW launcher. 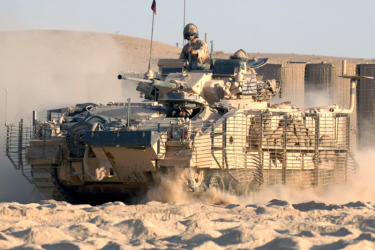