The Type SU 60 was Japan's first post-war armored fighting vehicle once development and production of military weaponry had been permitted in the 1950 as a result of the Korean War. The Type 60 is built with an all-welded steel construction and features a conventional layout with the driver compartment at front, with the commander behind, and a troop compartment (which can fit up to eight fully loaded infantrymen) in the rear. Entry and exit is through a rear ramp, although there are two escape hatches in the roof. Uniquely, the Type SU 60's defensive armament consists of a bow-mounted machine gun, a configuration rarely used in post-war designs, and the machine gunner sits next to the driver to the left of the hull. There is also a hull-mounted machine gun for the commander. Aside from this, the Type 60's design is relatively austere, featuring no NBC protection, or amphibious capability, and lacks infra-red equipment. The Type SU 60 became the standard APC of the JGSDF in the 1960s before being replaced by the Type 73 in the 1970s.

Development began in 1956 under the auspices of the Technical Research and Development Headquarters of the JGSDF, and two prototypes were built, the SU1 by Komatsu, and the SU2 by Mitsubishi. The latter was eventually selected as the Type SU 60 APC. Other variants included the Type SV 60 and Type SX 60 mortar carriers. A small number have also been fitted with KAM-3D wire-guided ATGMs. 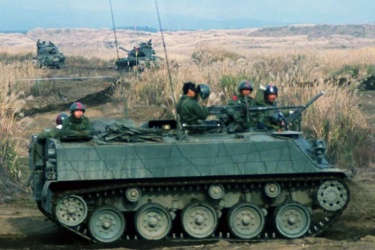