The Imperial Japanese Army continued to attach significant important to the tankette late in the interwar period, and the Type 97 Te-Ke was therefore born out of the need to replace the earlier Type 94. The Te-Ke was designed as a significant modernization of the Type 94, which had proved unreliable in service. The initial model had the engine compartment at the front of the vehicle, next to the driver, but this was later moved to the rear in order to facilitate communications with the commander, who operated the small one-man turret. Armament consisted of a Type 94 37-mm gun, the same as fitted on the Type 95 light tank and was adequate for reconnaissance duties (some featured a turret-mounted 7.7-mm machine gun instead). As expected, armor protection on the riveted hull was weak and was vulnerable to heavy machine gun fire. Like the Type 97, a lining of asbestos was used to lower internal temperature. The Te-Ke was used extensively in China and in the Battle of Nomonhan against the USSR. Early in World War II, it proved its use as it could traverse unsupported bridges but was later relegated to static defense as well as use as a cargo carrier.

Prototypes of a successor to the Type 94 were built in 1937, with the second model (with a rear engine) selected for production as the Type 97 Te-Ke. Numerous variants were adapted from the basic design, most notably the Type 98 So-Da ammunition, cargo, and troop carrier. 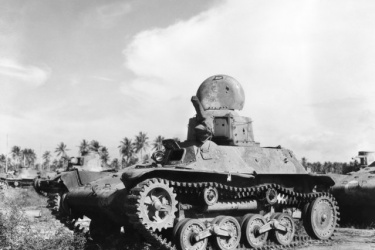