Following the development of the Type SU 60 and Type 73 APCs, the next step towards the modernization of the JGSDF was the introduction of a mechanized infantry combat vehicle, the Type 89. The design of the Type 89 follows the same trend as most of its NATO contemporaries. The hull is of all-welded aluminum construction that provides protection from small arms fire and shell fragments; a mine clearance system can also be added under the nose. The driving compartment is located at the front of the vehicle, behind which is mounted a two-man power-operated turret with an Oerlikon Contraves 35-mm KDE cannon (license-produced in Japan). The turret also carries two Jyu-MAT wire-guided ATGMs, one on each side, providing it with anti-tank capability. At the rear of the vehicle is the troop compartment, which can carry up to six infantrymen (a seventh sits behind the driver) who enter and exit through two rear doors. There are a total of seven firing ports, one on the rear door and three on the hull sides, each with a roof-mounted periscope sight. NBC protection is standard on the Type 89, as is night vision equipment, but amphibious capability is lacking. The Type 89 entered low scale production in the 1990s and as a result, has complemented but not replaced its predecessor, the Type 73. Despite its sophistication, export prohibitions on military weaponry mean that it cannot be supplied to foreign users.

A request for prototypes of a new IFV was ordered in 1984, resulting in the Type 89 with both Mitsubishi and Komatsu sharing production (the latter as a major subcontractor). There are no known variants. 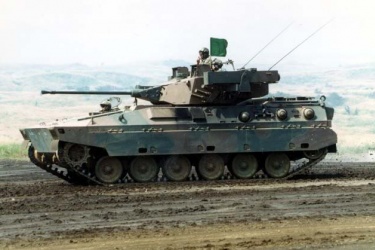