The Type 74 105-mm self-propelled howitzer was designed concurrently with the 155-mm Type 75 as a lighter, amphibous-capable vehicle with more rapid fire compared to its higher-caliber counterpart. Despite some resemblance to the Type 75, the Type 74 is a completely different vehicle being based on the hull of the Type 73 APC. Its layout established the template for subsequent Japanese self-propelled artillery with the driver seated at the front right and the engine to his left, while the fighting compartment was dominated by a large turret which housed a Japan Steel Works-designed 105-mm howitzer. This is capable of firing standard ammunition at a range of 14.5 km although further performance details have not been made public. Additionally, defensive armament consists of a 12.7-mm M2 machine gun. One of the advantages of the Type 74 over the Type 75 is amphibious capability which is achieved through a floatation screen and the use of its tracks for propulsion in the water. It also features NBC protection. The Type 74 was in service with the JGSDF exclusively and only a small number were built given that its short-range was not seen as adequate enough compared to the 155-mm and 203-mm howitzers also in use by the JGSDF. Nevertheless it served with the 2nd Artillery Regiment in Hokkaido before being retired in 1999.

First prototypes of what would become the Type 74 were completed in 1969-70 with production beginning in 1975. No variants aside from the standard model were built. 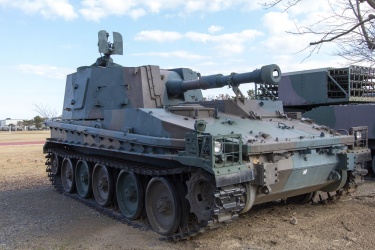