The success of the Type 2 Ka-Mi amphibious tank prompted development of a successor, the Type 3 Ka-Chi, this in turn based on the Type 1 Chi-He tank. The hull was significantly revised, however, with two extra road wheels per side, and a smooth sides that faired into the front and rear pontoons which gave it a boat-like appearance; these would be jettisoned once the vehicle came ashore. Additional features to aid navigation in water was a cupola extension that kept out breaking waves, as well as a separate tower towards the rear to keep the exhaust clear of water. Armament was identical to the Chi-He, and as such, consisted of the highly effective Type 1 47-mm gun, and retained the same 50 mm maximum armor, making it nearly identical to its land-based predecessor in terms of combat capability. Unfortunately, the Ka-Chi entered service too late to be of use in amphibious operations and like most Japanese tanks, were relegated to use as static defense after their first encounter at Kwajalein (and never in large numbers). The use of pontoon devices were subsequently copied by the Allies and used on specialized equipment during D-Day.

The Type 3 Ka-Chi was designed in 1943 and entered service the following year in small numbers due to the shortage of resources for armored vehicle production. No variants were built. 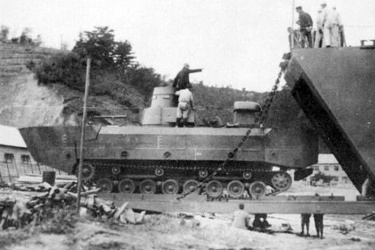