The Type 16 Maneuver Combat Vehicle (MCV) is a Japanese tank destroyer that follows the recent trend towards light, wheeled fire support vehicles with greater mobility and reduced cost compared to a main battle tank. Like other similar vehicles such as the Italian B1 Centauro or the US M1128, the Type 16 features an 8 x 8 configuration with the engine located at the front, the driver compartment behind it to the right. The fighting compartment is composed of a large turret that mounts a Japan Steel Works-designed 105-mm 52-caliber gun (likely adapted from the L7A3 gun used on the Type 74 MBT) that is capable of firing standard NATO ammunition. The turret does not feature an autoloader, which is common in vehicles of this size, but nevertheless is equiped with advanced optics and fire-control systems giving it the necessary capability to fulfill the anti-tank role. Although full details have not been revealed, it also appears to have modular composite armor which should provide protection against rounds of up to 25-30-mm at the front, and 14.5-mm all-around. One of the key features of the Type 16 is air transportability, and it can be carried by a C-2 or C-160 medium transport. This will allow it to be rapidly deployed to Japan's outer islands in the event of conflict, consequently also lowering the JGSDF's tank inventory. It is expected that up to 300 Type 16s will be built, equipping rapid reaction units.

The Type 16 MCV began development in 2007 with the first prototypes completed by the Technical Research & Development Institute appearing from 2008. If the designation is indication, it entered service in 2016 (or slightly later). There are no variants aside from the basic vehicle. 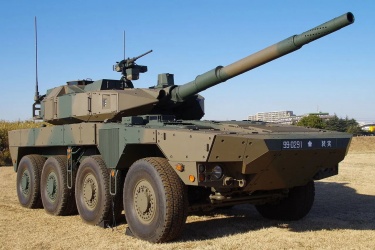