The Stormer was developed as a private venture by Alvis, using the basic hull of the CVR(T) Scorpion family along with many of the same components. Visually, the two vehicles are similar in shape, although the Stormer features an extra road wheel as well as a lengthened hull; protection is similar to the Scorpion, offering resistance against 14.5-mm rounds but appliqué armor can be fitted as well. The basic APC version can carry eight infantrymen, in a rear troop compartment accessible through a single rear door, but seats can be folded up to allow for different cargo. NBC protection is provided, and the vehicle is amphibious (an optional propeller kit gives it added water speed). In British service, the Stormer is used primarily as a mine-layer as well as a Starstreak air defense system but it is used in a myriad of roles in export service, mirroring the flexibility of the Scorpion family. Export customers of the Stormer include Indonesia, Malaysia and Oman.

The prototype of the FV4333 Stormer was first shown in 1978, with initial orders of the basic APC variant delivered initially in 1983 for Malaysia. The initial British variant was the flatbed Stormer VLSMS (Vehicle-Launched Scatterable Mine System), equipped with Minotaur anti-tank mines. A larger order equipped with the Volcano system was known as the Shielder. The other main British variant is the Stormer HVM (High Velocity Missile) air defense system, equipped with the Starstreak SAM. Export variants include APC, command post vehicle, ambulance, recovery, bridge layers and logistics vehicles. A later development resulted in the Stormer 30, with a 30-mm cannon and TOW launcher for use as an air-transportable armored reconnaissance vehicle but this remains in the prototype stage. 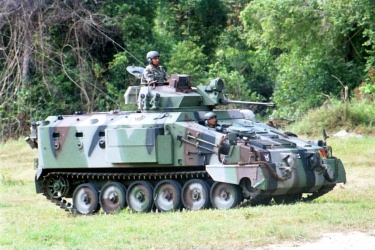