The SPz 12-3 Schützenpanzer Lang (also known by the company designation HS.30) was the first armored personnel carrier built specifically for the recently re-established West German army which until then had mostly used US-supplied vehicles. Although Swiss-designed, many were built by Leyland in the UK as well as Hanomag and Henschel domestically. The SPz 12-3 features an all-welded hull with a rear-mounted engine and a gun turret that houses a locally-built 20-mm HS 820 cannon, the same used on the SPz 11-2 recon vehicle. This was a considerably powerful armament for an APC which was the result of German Panzergrenadier doctrine of using APCs as fighting vehicles alongside tanks rather than simply infantry transports. The result of this is that the SPz 12-3 is also more heavily armored but this comes at the expense of a reduce troop load of just five; less than half of what the contemporary US M113 could carry. Additionally, it lacked amphibious capacity as well as NBC protection, the latter being a surprising omission given the high likelihood that chemical or nuclear weapons would be encoutered in the event of war with the Warsaw Pact. The quick development time also meant that initial vehicles suffered from teething problems which marred its reputation and it was eventually replaced by the Marder IFV in the early 1970s though many remained in reserve. It was never exported.

Production of the SPz 12-3 (HS.30) began in 1958 with deliveries completed just 4 years later; this short production time proved problematic although most issues were eventually solved. Aside from the basic APC version, the vehicle was also used as a the basis for a self-propelled 120-mm mortar SPz 52-3, launcher for the French SS-11 wire-guided anti-tank missile known as the JPz 3-3, the SPz 21-3 command and radio vehicle, and SPz 81-3 artillery fire-control vehicle. 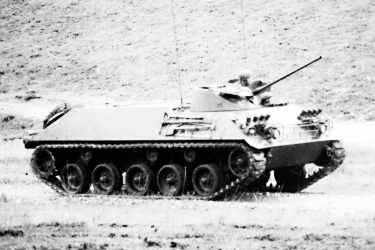