The Semovente L40 was one of Italy's two tank destroyer designs of World War II. It was designed using the chassis of the L6/40 light tank, but with the upper hull and turret removed and in its place was mounted a 47-mm M35 anti-tank gun. This was based on an Austrian Böhler dual-role (anti-infantry and anti-tank) gun that was license-produced, and which was also fitted on the M13/40 medium tank. Early versions of the L40 had no roof; the gun was mounted at the front of the hull and the only protection afforded to the crew was the gun shield. It was later decided to incorporate a box-like superstructure which offer a greater degree of protection although it was still highly vulnerable. The L40 was used in the Balkans, North Africa and especially in Russia, where it was the main armored fighting vehicle in service with the Italian Army on that front. Remaining units after the Italian surrender were taken up by the German Army and some were also provided to Axis ally Croatia.

Initial attempts at converting an existing armored vehicle into an anti-tank plaform involved the L3 tankette but this was later discarded in favor of the L6/40 light tank. The full designation of the resulting vehicle was Semovente L40 da 47/32 and came in two versions, the early type with an exposed gun mount and the later type with a lightly armored superstructure (later with a retractable cover). A command vehicle armed with 8-mm Breda machine guns was also built. 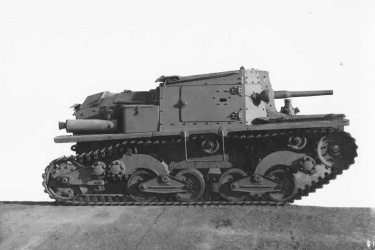