The IVECO Puma series of wheeled AFVs were initially designed to complement the B1 Centauro tank destroyer but are now in widespread service across the Italian Army combat regiments, in numerous roles. Two versions of the Puma exist, a 4 x 4 and a 6 x 6 model, with the latter being clearly larger and capable of carrying additional troops. The Puma has a conventional APC layout with an all-welded steel hull characterized by an inward sloping hull. Protection is sufficient against small arms fire and shrapnel. Depending on the version, the Puma can carry either six or eight infantrymen; these can enter or dismount through three doors, one on each side and one in the rear, all of which feature a bulletproof vision block and a firing port. The vehicle has NBC protection but is not amphibious. Aramment generally consists of an M2 12.7-mm machine gun mounted on the commander's cupola, but some versions are equipped with MILAN ATGMs, Mistral SAMs, and mortars. Aside from Italian Army service, a number of Pumas have been donated to the new Libyan National Army.

Design of the 6634 AVL began in the early 1980s but a requirement for larger vehicles led to the Puma, of which the first prototype was completed in 1988. This comes in 4 x 4 and 6 x 6 versions, the latter which are larger and carry two extra infantrymen. Variants include an ATGM carrier, SAM platform, command post vehicles, and mortar carriers. 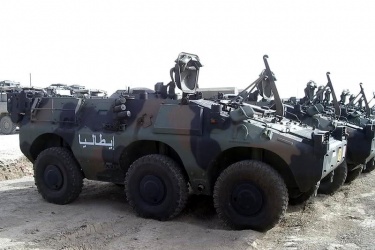