The Puma is designed as a replacement for the venerable Marder IFV, one of the first such designs fielded by a NATO army. Like most modern armored vehicles, the Puma was intended for a multitude of different battlefield roles and therefore is of a modular design, even though it physically resembles most other IFVs. Innovative features include the ability to be equipped with different armor configurations, and the presence of a one-piece crew cabin (with NBC protection) that allows for direct interaction among crew members. This is possible thanks to a markedly off-center turret, which houses a 30-mm autocannon as well as a EuroSpike LR missle launcher (the cannon is expected to be fitted with a new air burst munition as well). There are three levels of modular armor protection, which in its heaviest level adds nine metric tons of extra composite plates, but the basic armor is designed to resist 14.5-mm rounds as well as offer high survivability against mines. Despite the extra weight, it is air transportable on the A400M although armor plates must be carried on a separate aircraft for the heaviest variants. Additionally, the Puma is fitted with the MUSS soft-kill system for defeating enemy ATGMs. As many as 350 Pumas are under production for Germany with Canada and Chile also considering orders. Evidence of the Puma's sophistication was given by a recent US congressional report, naming it the most capable IFV currently available and superior to the planned Ground Combat Vehicle program.

The first prototype of the Puma was rolled out in 2005, with deliveries beginning the following year and service entry with the German Army in 2010. The basic IFV version features three possible modular armor configurations giving it a weight of 29.4 (Level A), 31.45 (B), and 43 (C) metric tons, in the latter case nearly as much as an MBT. Level C protection, however, is said to withstand tank rounds in the frontal arc. 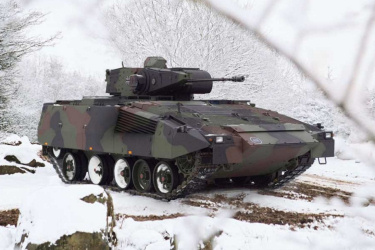