The Panhard 178 was the most modern armored car available to the French Army at the start of World War II. It was designed in the 1930 for the purpose of replacing the World War I-vintage White-Laffly armored cars that had been modernized over the years. The Panhard 178 was a 4 x 4 design designed as a reconnaissance vehicle for cavalry units. It featured a compact design, most notably a very low sillouhette that was interrupted only by the fighting compartment in the middle of the vehicle. Aside from the main driver, a rear driver/radio operator was also positioned next to the offset engine. Main armament consisted of a 25-mm gun mounted inside a fully armored two-man turret which was quite large by French standards, being larger than that found on some tanks. Performance was generally good by early World War II standards, although the vehicle suffered from some off-road mobility issues. At the start of the war they equipped motorized and light cavalry divisions of the French Army and following the surrender, many were taken over by the Germans. Some surviving vehicles were modified with 47-mm guns and were used in post-war colonial service, including by many former French colonies such as Syria where it was still in service by the mid-1960s.

The prototype of the Panhard 178 was completed in October 1933 with testing against rival designs from Renault, Berliet, and Latil beginning the following year. Design problems led to further revisions before it was eventually accepted into service. No major variants were built, although some were modified for colonial service and one tank destroyer conversion saw action during the German invasion. In German hands, the vehicle was designated Panzerspähwagen P204(f) and some were modified with radio frame aerials. A post war modification featured a new turret and a 47-mm gun (originally a 75-mm gun was planned), these were known as the Panhard 178B. 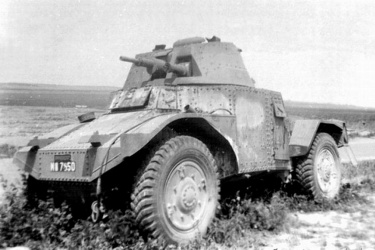